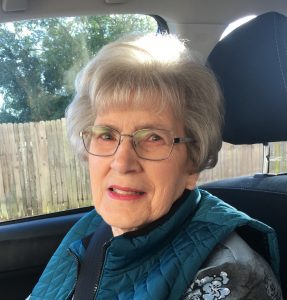 JoAnne Lenore Jackson, 84, of Mason City passed away on May 27, 2019 at 10:15 p.m. at Abraham Lincoln Memorial Hospital in Lincoln. She was born on June 21, 1934 in Mason City, the daughter of John and Lenore (Benscoter) Bloh. She married Harry Jr. Jackson on January 3, 1954 at the United Presbyterian Church in Mason City. He preceded her in death on November 30, 2010. JoAnne is survived by three children; Patty (Mark) Noonan of Mason City, Randal (Janet) Jackson of Mason City, Debbie (Mike) Liccar of Crete, five grandchildren; Cassie (Matt) Seibt of Lockport, Scott (Julie) Jackson of Mason City, Angela Liccar of Chicago, Jessica Liccar of Detroit, MI, and Christina (John Laughlin) Liccar also of Chicago. JoAnne is also survived by five great grandchildren. She was preceded in death by one granddaughter, Jacy Hoagland, her parents, and two sisters; LaVerne Knoles and Lorraine Benedict White. JoAnne graduated from Mason City High School in 1952. She was a faithful member of the United Presbyterian Church in Mason City where she had served as an Elder, was a member of the choir, and started the Clothes Closet. During WWII, JoAnne christened the USS Blackhawk. She enjoyed volunteer work throughout her life as well as cooking, baking and camping with her husband for over 50 years until his passing. JoAnne was also the mother to three foreign exchange students, Martha Ganoza Hoffman, Claudio Cidade Gomez and Dirk Van Liemp. She was an avid Bridge player and played for several clubs in the county. A visitation will be held for JoAnne on Saturday, June 1, from 10 a.m. to noon at the United Presbyterian Church in Mason City. The Funeral will follow visitation at noon also at the church. Rev. Charlotte Poetschner will officiate. Memorials may be made to the United Presbyterian Church. Cremation rites will be accorded and burial will take place at Mason City Cemetery at a later date. Online condolences may be left for the family at www.hurleyfh.com Hurley Funeral Home in Mason City, IL is assisting the family with arrangements.