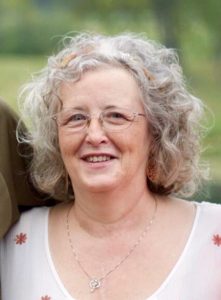 Mary Sue (Bennett) Black, 60, of Pekin, passed away at 12:36 a.m. Monday, April 29, 2019 at UnityPoint Health in Pekin. She was formerly of Lewistown and Canton. Born Jan. 11, 1959 in Akron, Ohio to Kline and Edith (Williams) Bennett, she married Christopher L. Thomas. She later married John H. Black, Jr. on Aug. 29, 2015 at Milan. He survives. Also surviving are her parents of Lewistown; one son, Paul (Samee) Thomas of Canton; one daughter, Erica (David) Schlieker of Canton; seven grandchildren, Tanner Thomas, Teagann Hindson, Laela Hindson, Silas Thomas, Ethan Yaste, Evan Yaste and Stella Schlieker and three sisters, Stephanie (Carl Krahl) Bennett of Milan, Stacy (Brad) Beard of Lewistown and Sheri (Mike Thompson) Bennett of Fairview. She was a 1977 graduate of Lewistown High School. Sue worked for Professional Therapy Services for the past seven years, last working Thursday at UnityPoint Health in Pekin. She previously had worked at Graham Hospital in Canton and for Harbor Light Hospice. Sue was devoted to her family and loved supporting her grandchildren with their activities and sporting events. She loved the color purple and enjoyed scrapbooking. She was a huge fan of the Minnesota Vikings and Chicago Cubs. In earlier years, Sue showed cattle and was a member of Jolly Workers 4-H Club and F.F.A. Sue was proud to be the first recipient of the Sunrise Showmanship Award given during the Fulton County Fair in 1969. She was a spiritual person and was raised in the Episcopal Church. A celebration of life gathering will be held from 1 to 5 p.m. May 12 at American Legion Post 16 in Canton. Cremation has been accorded by Preston-Hanley Funeral Homes & Crematory in Pekin. Memorial contributions may be made to Fulton County 4-H, in care of University of Illinois Extension, Fulton County Branch Office, 15411 North Illinois 100 Highway, Lewistown, IL 61542 or to Tazewell Animal Protective Society, 100 Taps Lane, Pekin, IL 61554. To express condolences online, visit www.preston-hanley.com