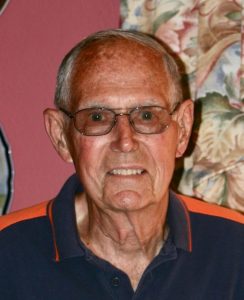 A life spent serving his country, community, church, and family came to an end on April 30, 2019, when Cecil Gilson Jr. left this life to journey to his heavenly home. Cecil was born on October 5, 1928 in Canton, the son of Cecil Gilson Sr. and Leah Showens Gilson. He married Elnora Bohm on June 3, 1951 in Havana, Left behind to mourn his passing and continue his legacy are his wife; three sons: Marshall (Karen) Gilson of Bartonville; Kevin (Sherry) Gilson of Havana; and Craig (Jenni) Gilson of Springfield; seven grandchildren: Andy (Melissa) Gilson, Kirk (Aneesha) Gilson, Tony (Steph) Gilson, Josh (Jackie) Gilson, Jay Gilson, Jess (Tyler) Sayers, and Ashleigh (Kyle) Gilson; and seven great-children: Ryan and Jack Gilson, Alexis Sayers, Eleigh and Kyleigh Gustafson, Brooklyn Gilson, and Evan Miller. Cecil was preceded in death by his parents, his sisters, Vera Mae Savill and Barbara Bell, and his brother, Tom Gilson. Cecil was a 1946 graduate of Canton High School and attended Brown Business College in Peoria. He worked at International Harvester for 36 years, retiring as a Supervisor of Standards and Methods. He was one of the last five employees to walk out of International Harvester in Canton when it closed, ceremoniously locking the door behind them. He later was employed as a manager of the Secretary of State Driver’s License Facility in Havana for 8 years. Following his second retirement, he and Elnora became full-time volunteers for the American Red Cross. During their 17-year “career” they organized countless blood drives, always striving to beat the previous donor totals while providing a home-cooked meal at the end. Cecil was a lifelong blood and platelet donor, giving more than 25 gallons to those in need, and was instrumental in starting the platelet donation program at Mason District Hospital. Cecil proudly served his country, first in the Army for two years during the Korean Conflict and then serving in the National Guard for 25 years, retiring as a Major. In November 2014 he was proud to participate in the Honor Flight to Washington, DC. Cecil was very involved in the local Havana community, being an active member of the Jaycee’s, American Legion, Havana Little League, Boy Scouts, and Cub Scouts. His political service included serving as alderman for the City of Havana and Mason County Republican Precinct Committeeman. One of his proudest accomplishments was his effort in helping to establish the TIF (Tax Increment Financing) district for the city of Havana. He was honored for his civic involvement by receiving the 2002 Havana Chamber of Commerce Citizen of the Year award. The Havana Church of Christ was Cecil’s second home and he served in a variety of leadership roles including Sunday School Superintendent, Deacon, Elder, Trustee, and Chairman of the Board. His passion, however, was serving as Chairman of the Building and Grounds Committee, being involved in installing a new elevator, building new additions, or handling any odd jobs that arose. Throughout the years, he and Elnora supported a variety of mission projects, readily donating their time and financial support to organizations both locally and worldwide. As much as Cecil supported his community, friends, and church family, his greatest pleasure in life came from time spent helping his own family. He and his tool bucket could be found most nights and weekends working on installing electrical boxes, fixing plumbing issues, getting stair risers to “walk just right”, or plastering a wall as he helped to build or remodel homes for all of his sons and grandkids. Grandpa Cecil and Old Green made countless trips driving grandkids to orthodontist appointments, delivering young golfers to the course, driving to out-of-town sporting events, and delivering two shifts of school lunches daily. Visitation will be held on Thursday, May 2, from 5 to 7 p.m. at the Havana Church of Christ. Funeral services will be Friday, May 3, 10 a.m. at the church. Burial will follow the services at Laurel Hill Cemetery in Havana. In celebration of Cecil’s life of service, the family asks that in lieu of flowers memorials be given to the following: the American Red Cross to support local blood drives, Lake Springfield Christian Assembly to provide scholarships for youth campers, or the Havana Church of Christ. Hurley Funeral Home in Havana is in charge of arrangements.