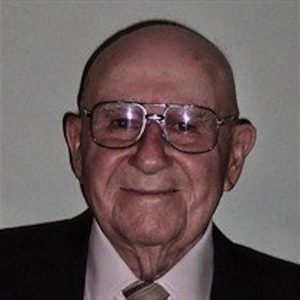 Lowell W. Barrett, 99, of rural Chandlerville, passed away peacefully on April 29, 2019 at his home. He was born November 25, 1919, at home, to Lenora and Charles Spurgeon Barrett. He married Merle Eilers on January 2, 1940, in Palmyra, MO. He was preceded in death by his wife Merle in 2004, his son, Larry in 2015, and his parents, Charles Spurgeonn and Lenora Barrett. He was the last surviving sibling. Marie Keithley, Marjorie Eilers Hobbs, Melvin Barrett and Arthur Barrett preceded him in death, as well as brothers and sisters-in-law, Birdsell Keithley, Mary Duncheon Barrett, Irene Barrett Snider, Lloyd Eilers, Wally Hobbs, Delbert Eilers, Evelyn Eilers preceded him in death. Nephews Kenny and Randal Barrett, Rich and Eric Eilers, have also passed. He is survived by his daughter-in-law, Karen Barrett and grandsons, Gregg (Shannon) Barrett, Tim (JoAnna) Barrett and Matt Barrett (partner Larry O’Toole), great-grandchildren, Hannah, Cooper, Tyler, and Ryan Barrett, as well as many nieces, nephews and great nieces and great nephews, and sister-in-law Imogene Eilers. He began farming early, driving a team of horses for his dad, by the time he was 10 years old. That was the beginning of his love of the land and farming. He farmed in Mason and Cass counties. After moving to Cass County, in 1958, Lowell and Merle worked side by side, working long hours. Even after retirement in 1996, he continued to have a great desire to farm. He was baptized in 1937 at Bethel Baptist Church. He graduated from Bath-Lynchburg High School in 1939. He was a devout Christian, who, during his lifetime, belonged to Bethel Baptist Church and currently is a member of Mt. Olive Baptist Church. He was a devoted husband, father, grandparent and great-grandparent. For the last six years, he received wonderful 24 hour care from Heather McHenry, Mindy Powell, Jody Coffey (deceased), Marty Ruppel, Chrissie Horner, Amber Horner, Abigail McHenry and Allie Guinan-Miller. These girls enabled Lowell to live at home and feel a part of the farm operation. Services will be held at Mt. Olive Baptist Church on Saturday, May 4 at 11 a.m., with visitation one hour prior to the services. Burial will be at Bethel Cemetery, directly after the service. Followed by a meal at Mt. Olive Baptist Church. Memorials may be given to Mt. Olive Baptist Church. Lintner-Hurley Funeral Home in Chandlerville is in charge of arrangements. To send flowers or a memorial gift to the family of Lowell W. Barrett please visit our Sympathy Store.