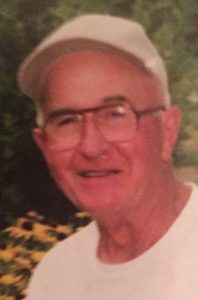 Laurence “Pat” Bloyd, 91, of Lewistown, passed away at 8:22 a.m. on Wednesday, April 10, 2019 at Sunset Rehab & Health Care. He was born on September 29, 1927 in Lewistown to Richard and Anna (O’Donnell) Bloyd. He married Martha Dell Atwater on September 9, 1949 in Ipava, she preceded him in death on April 10, 1963. He later married Georgia Eveland, she survives. Also surviving are three children, Debby (Carl) Powell of Lewistown, Margy (Rick) Sedgwick-Renner of Canton, and Kevin (Shelley) Bloyd of Canton; seven grandchildren; nine great-grandchildren; and several nieces and nephews. Pat was preceded in death by his parents, one grandson, two brothers, and one sister. Pat graduated from Lewistown Community High School on May 29, 1945. He worked at Illinois Power of Havana for over 40 years and also worked as a self-employed mason. He was a member of the Lewistown VFW. Pat was an avid hunter, fisherman, and gardener, and loved to till his garden just like his father. Pat enjoyed bowling and horseshoes. He truly loved morning coffee with his sister, Maralee. Pat cherished his time with his precious wife, Martha Dell, mother of their three children, she called him home on the anniversary of her death, 56 years to the day. Pat served in the Army with the 1st Cavalry Division at Tokyo, Japan, where he received a Victory Medal and was discharged on March 31, 1947 and later served as a Sergeant 1st Class in the United States National Guard. Services will be held at 11 a.m. on Saturday, April 13 at Sedgwick Funeral Homes & Crematory in Canton where a visitation will be held from 9 to 11 a.m.. Burial with military honors will follow at Oak Hill Cemetery in Lewistown. Memorials can be made to Meals on Wheels or the Lewistown VFW. To make online condolences you may go to www.sedgwickfuneralhomes.com.