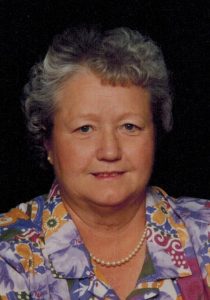 Verna “Joanne” Clark, 84, of Chandlerville, passed away on April 11, 2019, at the Jacksonville Skilled Nursing and Rehabilitation Center in Jacksonville. She was born December 5, 1934, in Cass County, the daughter of Leonard and Beulah (Atterberry) Milstead. She married J.C. Clark on May 28, 1957, in Tallula, who preceded her in death on January 17, 2003. Joanne was a 1952 graduate of Chandlerville High School. After graduating, she was employed for nine years at Well’s Lamont Glove Factory in Beardstown as a seamstress before it closed, for seventeen years she was employed in Havana at Atwood Vacuum and Dana Corporation as a machine operator and also sold Avon for seven years. She also baked and decorated cakes. She loved working in the yard and garden. Her pride and joy were her two cats they had adopted named Smoke and Lightning who lived to be fourteen and eighteen years old. She also liked watching the St. Louis Cardinals on T.V. Joanne is survived by three brother in laws, Herschel (wife Roberta) Clark, Donald (wife Shirlee) Clark and Richard (wife Sharon) Clark; a special cousin, Hazel Edge; and many nieces and nephews. She was preceded in death by her parents, a brother, Ira Edison Milstead, and a sister in law, Silvia (husband Tom) Palmer. Visitation will be held on Sunday, April 14, from 4 to 7 p.m. at Lintner-Hurley Funeral Home in Chandlerville. The funeral service will be held on Monday, April 15, at 10 a.m. at the funeral home with Rev. Ken Gennicks officiating. Burial will take place at Chandlerville Cemetery immediately following the service. Memorial contributions in Joanne’s name may be made to the American Legion Post 694 in Chandlerville or the Chandlerville Cemetery Fund. Please visit Joanne’s online obituary at hurleyfh.com to leave condolences and share memories.