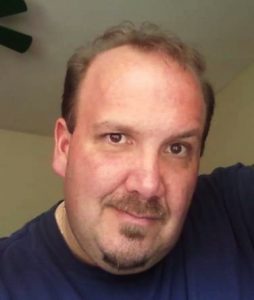 Gregory Alan Lynn, 52, of Champaign, formerly of Havana, passed away on Tuesday, April 9, 2019 at 10:30 a.m. at his home. He was born on February 28, 1967 in Havana to Robert Lynn and Victoria (Chaney) Fairow. Greg is survived by his father Robert, brother, Jeff (Michelle) Lynn of Bloomington, sister, Nikki (James Sams) Metz of Havana, nephews, Brock Lynn and Brandon Slagle, nieces, McKinlee Metz and Megan Vader, and many aunts, uncles, and cousins. He was preceded in death by his mother and grandparents; Charles and Irma Chaney, Marjorie Hubbard, and Dennis Lynn. Greg is a 1985 graduate of Havana High School. He enjoyed his family, photography, Seinfeld, and his Mustang. He had many friends and could always make them laugh. A visitation will be held on Sunday, April 14 from 3 p.m. to 5 p.m. at Hurley Funeral Home in Havana. Funeral services will be held on Monday, April 15 at 11 a.m. also at Hurley Funeral Home. Burial will be held at Laurel Hill Cemetery following the service. Pastor Bill Boyce will officiate. Memorial donations can be left in Greg’s name to St. Jude Children’s Research Hospital or Tourette Association of America. Online condolences can be left for the family at www.hurleyfh.com. Hurley Funeral Home in Havana is assisting with arrangements.