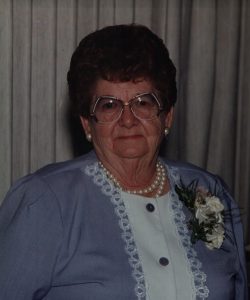 Carrie Louise Gregory, 97 of Washington, formerly of Havana, passed away at Morningside of Washington – Assisted Living, at 7:28 a.m. on Friday, March 1, 2019. She was born January 29, 1922, in Havana to Charles Leonard and Clara May (Bernard) Powell. She married Wayne Gregory on July 17, 1938, in Havana. He preceded her in death on October 2, 1994. Mrs. Gregory is survived by two children: Jo Ann Butler of Forest City, and Larry Gregory of East Peoria, as well as five grandchildren, twelve great-grandchildren and twenty great-great-grandchildren. She was preceded in death by her parents, husband, brother, Bob Powell, sister Cora Anderson, son-in-law Fred Butler and daughter-in-law, Kelly Gregory. Mrs. Gregory was of the Baptist Faith. She served as a Precinct Committeeman in Peoria and Mason County for 56 years. She operated Gerster’s Bakery in Lewistown and later worked for many years for the Illinois Secretary of State as a Driver’s License Examiner in Springfield and later in Havana, where she retired. Visitation will be held at Hurley Funeral Home in Havana from 5 until 7 p.m. on Wednesday, March 6. Funeral services will be held on Thursday, March 7, 2019 at 10:00 a.m., also at the funeral home. Rev. Daniel Swihart will officiate. Burial will follow the services at Laurel Hill Cemetery in Havana. Memorial contributions may be made to AmVets, American Cancer Society, Illinois Cancer Center in Peoria or the donor’s choice. Online memorial messages may be left for the family at www.hurleyfh.com. Hurley Funeral Home in Havana is in charge of arrangements.