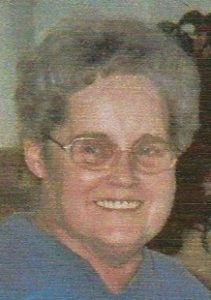 Katherine G. Miller, 80, of Table Grove, passed away at 6:54 a.m. on Tuesday, February 19, 2019 at Graham Hospital in Canton. She was born on February 20, 1938 in Macomb, the daughter of Paul and Lela (Howell) Porter. Katherine married Norm Miller on August 9, 1958 in Ipava. He survives. Survivors also include her daughter Samantha (Dr. Randy) Klinedinst of Canton; son Alan (Susan) Miller of Bernadotte; four grandsons, Cliff (Rhianna) Miller, Tyson (Courtney) Klinedinst, Josh (Nichole) Miller, and Seth Klinedinst; six great-grandchildren and two brothers, Sam (Linda) Porter of Ipava and Bill (Nancy) Porter of Vermont. She is preceded in death by her parents, her sister Mary Jo Keefauver and a great-granddaughter. Katherine worked at the Farmers Elevator in Table grove for several years. Katherine retired as the secretary at VIT High School. She also kept the scorebook for VIT Junior High basketball teams for several years. She was a member of the Ipava Order of the Eastern Star and the Table Grove Community Church. Katherine liked to sew, garden and put out flowers, bird watching, going to auctions and antiquing. She loved to cook and having family over for the holidays. She also loved being around her grandchildren. Services were held at 10 a.m. on Friday, February 22 at Shawgo Memorial Home in Astoria. Pastor Kevin Kessler officiated. A visitation was held from 5 to 7 p.m. on Thursday, February 21 at the funeral home. Interment took place in the Harris Cemetery in Table Grove. Memorials may be made to the Harris Cemetery for cemetery upkeep.