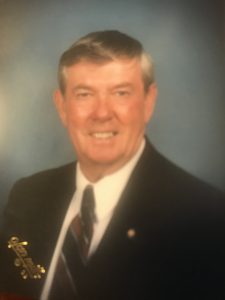 James Rayner Thomas, Sr., 85, of Havana, entered eternal peace at 3:45 a.m. on Thursday, February 14, 2019 in his home, surrounded by his family. Jim was born in Lincoln on June 17, 1933, to Arthur R. and Mildred (Gilchrist) Thomas. He married Carolyn Ann Drigotas in August 1958 and later married Pamela Heil on July 17, 1982. Jim will be lovingly missed by his wife, Pamela, of Havana; son, James Jr. “Jamie” (Laura) Thomas; grandson, James R. Thomas III and granddaughter, Carolyn Ann Thomas, all of Colorado; brother-in-law, Dr. Ogden N. Munroe; nephew, Thomas K. (Stacia) Munroe; and great-nephew Logan H. Munroe; sister-in-law, Connie Drigotas of Kennebunk, ME and De Heil of Taylorville, as well as many nieces and nephews. He was preceded in death by wife, Carolyn Ann (Drigotas) Thomas, parents and sister, Anne T. Munroe. Jim graduated from Springfield High School in 1951 and from Monmouth College in 1955, where he played varsity basketball. After college, Jim proudly served his country in the U.S. Marines and was a Korean War Veteran, attaining the rank of 1st Lieutenant. His passions were God and Family. He was dedicated to his family. He was able to face challenges and setbacks with grace and dignity. He was an avid sportsman and proudly enjoyed watching his son and both grandchildren play college basketball. He had served as Mayor of his township, when living in Maryland, President of Land of Lincoln Insurance Company, Board of Directors at Land of Lincoln Bank, President of Town & Country Reality and Illinois Department of Revenue. He was a member of the First Christian Church of Springfield and a member of Central Christian Church in Havana, where he served as Board Chairman, Elder and Trustee. Funeral services were held at Central Christian Church in Havana at noon, on Monday, February 18, with visitation one hour prior to the services. Burial followed the services at Laurel Hill Cemetery in Havana. Rev. Dr. Donald Graham officiated. Memorial contributions may be made to Central Christian Church in Havana. Online memorial messages may be left for the family at www.hurleyfh.com. Hurley Funeral Home in Havana is in charge of arrangements.