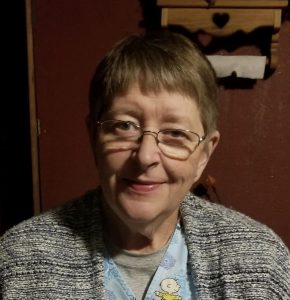 Joyce Marie Witt, 71, of Easton passed away at 6:46 p.m. on Wednesday, February 6, 2019 at Memorial Medical Center in Springfield. She was born on June 7, 1947 in Mountain City, Tennessee to Thomas and Rader (Dugger) Guy. She married Edward “Butch” Witt on January 2, 1965 in Petersburg. He preceded her in death on January 9, 2015. Joyce is survived by her children Ron (Lynn) Witt and Ruthie (Cleo) Clark, both of Easton, five grandchildren, and several great-grandchildren. She is also survived by her sisters Sherill of Craig, Colorado, Jo Zeller of Petersburg, and Minia of Phoenix, Arizona. She was preceded in death by her parents, husband, brother Tom, and sister Maxine. Joyce worked as a CNA at Mason City Area Nursing Home for many years. She deeply loved animals and owned one dog, five cats, and several chickens. She enjoyed working with the youth. She also helped open four SAIL homes for mentally handicapped individuals. A graveside service will be held on Monday, February 11 at 11 a.m. at Easton Cemetery. Rev. Abraham Mogerman will officiate. Memorial contributions can be made in Joyce’s name to Pets Without Parents or the Alzheimer’s Association. Online condolences can be left for the family at www.hurleyfh.com. Hurley Funeral Home in Havana is in charge of arrangements.