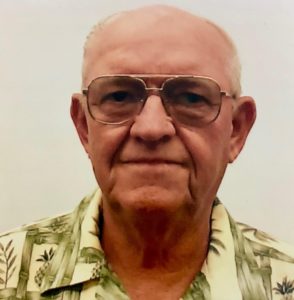 Wayne Frederick Vanderveen, 84, of Havana, passed at Memorial Medical Center in Springfield, at 8:17 p.m. on Thursday, December 20, 2018. He was born February 3, 1934, in Mason County, IL, to Fred B. and Eda K. (Mohlman) Vanderveen. He married Helen M. Bohm on February 23, 1958 at St. John’s Lutheran Church. Mr. Vanderveen is survived by his wife, Helen M. Vanderveen, of Havana and daughter and Robin (Paul) Labonte of Venice, Florida. He was preceded in death by his parents and one son, Brantz Vanderveen. Mr. Vanderveen was a member of St. John’s Lutheran Church near Bath, Illinois, where he had served as Church Treasurer and Chairman as well as Sunday School Teacher and Superintendent. He was baptized at St. John’s Lutheran Church on February 21, 1934 and confirmed into the church on June 1, 1947, both by Rev. Horstman. He served in the US Air Force from 1953 to 1957. He was a member of Mason County Farm Bureau, Mason District Hospital Board of Trustees (1980 – 1993) and Mason County Farm Bureau Board (1976 – 1979.) He farmed in Mason County his whole life, retiring in 2000. Visitation will be held at Hurley Funeral Home in Havana from 2 until 4 p.m. on Sunday, December 23. Funeral services will be held at St. John’s Lutheran Church at 10 a.m. on Monday, December 24. Burial will follow the services at Laurel Hill Cemetery in Havana. Rev. Brian Lesemann will officiate. Memorial contributions may be made to Mason District Hospital or St. John’s Lutheran Church. Online memorial messages may be left for the family at www.hurleyfh.com. Hurley Funeral Home in Havana is in charge of arrangements.