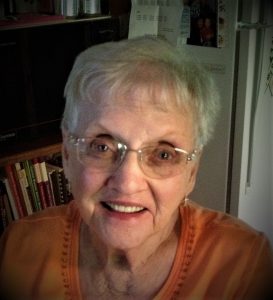 Norma J. LaMaster, age 90, of Chandlerville and formerly of Beardstown, died Friday, September 21, 2018 at Mason District Hospital in Havana. She was born March 8, 1928 in Beardstown, the daughter of Page and Ruth Taylor. She married Milton C. LaMaster, Sr. on October 4, 1952 in Beardstown, and he preceded her in death on August 11, 2009. She is survived by her children Ruth LaMaster of Glen Carbon and Milton C. LaMaster, Jr. of Beardstown; one grandson Jared Milton LaMaster; two great grandchildren Alexis and Austin LaMaster; and a sister Sally Moore of Beardstown. She was preceded in death by her parents, her husband, and a sister Edna Mae Taylor. Mrs. LaMaster attended Beardstown High School. Her mother died while she was in high school, and that is when she began a lifetime of serving people. She worked alongside her husband at Glendale Tavern and Meyer Hotel in Beardstown. She was very personable, with a wonderful sense of humor, an infectious laugh, contagious smile, and never met a stranger. She loved reading murder mysteries, nature, especially watching Hummingbirds and House Wrens, and fishing. In her younger years, she enjoyed dancing and roller skating, and even had a chance to audition for an Abbot and Costello movie. Most of all, she was loving, caring, and generous to her family and friends, and will be greatly missed by all. Cremation rites have been accorded. There will be no services. Memorials have been suggested to Mason County Home Health. Condolences may be left online at www.colwellmemorialhome.com or on Facebook at Colwell Memorial Home. Colwell Memorial Home in Beardstown is in charge of arrangements.