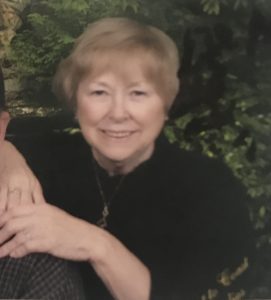 Nola Boothe, 77, of Havana passed away on Monday, September 10, 2018 at OSF St. Francis in Peoria. She was born on January 12, 1941 to Gracy (G.O) and Thelma Rains in Havana. She married John Boothe on October 3, 1970 in Havana. Nola leaves behind her heart and love of her life for many years, husband John, children Stuart (Candice) Boothe, daughter Lori (Kevin) Boothe Fornoff, brother Charles (Rita) Rains of Lakeland, Florida, grandchildren Jason and Sarah Boothe, Gavin Fornoff, Brandon and Blaine Adams, and great-grandchildren Bexley and Beckett Boothe, JJ, Summer, Daniel, and David Burchett, Melvin Fornoff, and Gideon and Gabriel Cunningham. Several nieces and nephews touched her heart so deeply during her life as well. She was preceded in death by her parents, brother, David Johnson, and sister Lola D. Boggs. Nola was a registered licensed cosmetologist in Illinois. She owned and operated Nola’s Beauty Shop for 6 years at Morgan’s Shopping Center and the Hairdressers in Havana for over 20 years. She co-partnered a business with Clemence Arcila called Ye Ole Sweet Tooth tea room in Havana, then she owned and operated Everlasting Design gift shop on Main Street in Havana until health issues caused her to go into semi-retirement in 1994. She and her husband John had a small RV park where they spent the following years in Texas from 1994 until the present. Nola was a member of the National Hairdressers Association and Eastern Star. She was also the commander of the Havana Boat and Ski Club and an active member of the U.S. Coast Guard Auxiliary with husband John for several years where she taught safe boating classes. She enjoyed painting, visiting with friends, and just relaxing one day at a time. A visitation will be held on Wednesday, September 12 from 5 p.m. to 7 p.m. at Hurley Funeral Home in Havana. Funeral services will be Thursday, September 13 at 10:30 a.m. at the Church of Christ in Havana. Pastor Bill Boyce will officiate. Burial will be held at Laurel Hill Cemetery in Havana. Memorial contributions can be left in Nola’s name to the Diabetes Association. Online condolences can be left for the family at www.hurleyfh.com. Hurley Funeral Home in Havana is in charge of arrangements.