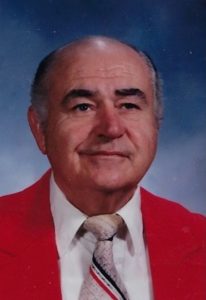 obert Detrick, age 82 of Lewistown, passed away at 7:30 a.m. Saturday, September 1, 2018 at his home. He was born on August 1, 1936 in Quincy, the son of C.P. and Carrie Mae (Lawson) Detrick. He married Marilyn Black on March 1, 1961 in Lewistown, She survives. Also surviving are two sons; Daniel (and Julie) Detrick of Huntsville, AL and Will Detrick of Davenport, IA, four grandchildren, Aaron, Samuel, Maggie, and Wyatt Detrick, and his sister, Virginia Crase of Manito. Bob was preceded in death by his parents and one son, Steven Detrick. Bob taught social studies at East Peoria and Pekin before being called to the military. Throughout his career in the military and educational field, Bob was school principle at Manito, school administrator at Easton, and taught social studies at Illini Central Schools. He also taught the Chinese language under a fellowship program at Washington University in St. Louis. Bob entered the United States Air Force. He attended college at WIU in Macomb before being called back to the military to attend flight school. He was also sent to signal school, where he learned the Chinese language. He was most proud of the medal received from General Lai Ming-Tang, Chief of the General Staff, Ministry of National Defense, Republic of China. He was a life member of the Havana VFW Post #6408. He was a 50 year member of the Manito Masonic Lodge #476 AF & AM, the Order of the Eastern Star of Pekin, the Peoria Consistory Masonic Temple, and AFIFI Shriners of Tacoma, WA. Bob enjoyed camping, fishing, taking walks and target practice. He took piano lessons as an adult and even participated in several recitals. He enjoyed owning two 1934 Fords during his lifetime. Services will be held on Saturday, September 8 at 11 a.m. at the Mt. Pleasant United Methodist Church in Lewistown. Pastor Kathy Barrett will officiate. Visitation will be held on Friday, September 7 from 5 to 7 p.m. at Shawgo Memorial Home in Astoria and on Saturday, one hour prior to the services at the church. Masonic services will be held on Friday evening at 7 p.m. at the funeral home, provided by the Vermont Masonic Lodge. Interment will be in the Apple Cemetery in Lewistown with full military rites. Memorials may be made to the Mt. Pleasant United Methodist Church, the Easton United Methodist Church, or the Shriners Hospital for Crippled Children.