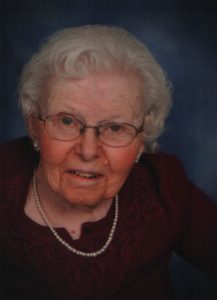 Bernice Marie Hahn, 99, of Havana, passed away at 10:51 p.m. on Saturday, August 18, 2018 at Mason City Area Nursing Home. She was born October 1, 1918, in rural Havana to Edgar and Dena (Mohlman) Hahn. Ms. Hahn is survived by two cousins: Alvena (Virgil) Gathmann, of Manito and Wayne (Helen) Vanderveen of Havana, as well as several extended cousins. She was preceded in death by her parents. Ms. Hahn was a lifetime member of St. Paul’s Lutheran Church in Havana, where she had been a member of Walther League and later, Altar Guild. She had worked as a cook at Havana High School for 17 years. She later worked in the deli at IGA, in Havana, where she baked pies and other pastries. She enjoyed the company of her pets and had many cats and dogs throughout her lifetime. Funeral services will be held at St. Paul’s Lutheran Church in Havana at 10:30 a.m. on Wednesday, August 22, with visitation one hour prior to the services. Burial will follow the services at Laurel Hill Cemetery in Havana. Rev. Kevin Wendorf will officiate. Memorial contributions may be made to St. Paul’s Lutheran Church, Mason District Hospital or Mason City Area Nursing Home – Resident Activity Fund. Online memorial messages may be left for the family at www.hurleyfh.com. Hurley Funeral Home in Havana is in charge of arrangements.