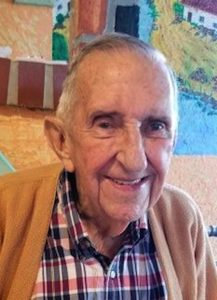 Paul Eugene Blakeley passed away Thursday, July 26, 2018 at the age of 90. Mr. Blakely was the son of Oliver and Leona Blakeley (nee Huber), and the brother of Lucille Lippert. They have all preceded him in death. He was the husband of Marion for 60 years. She preceded him in death in 2014. Paul leaves behind his daughter Debbie Crague and his son Danny (Nancy). He will also be missed by his grandchildren Sarah (Rick), Emily (Mitchell), Zack, and Maddie; and his great grandchildren, Charlotte, Annie, Jacob and Caden and his brothers, Doug, Scott and Don Blakeley. Paul spent the last years of his working career at SpiceCraft in St. Louis. Funeral service will be held at Trinity Lutheran Church, 14088 Clayton Road, Chesterfield, MO, Wednesday, August 1, 2018 at 9 a.m. If desired, contributions may be made to Trinity Lutheran Church or the Leukemia and Lymphoma Society. Visitation is at the Schrader Funeral Home and Crematory, 14960 Manchester Road at Holloway, Ballwin, MO, Tuesday, July 31, 2018 from 4 to 8 p.m. and at the church Wednesday, from 8 a.m. until time of service. Friends may sign the family’s on-line guestbook at Schrader.com.