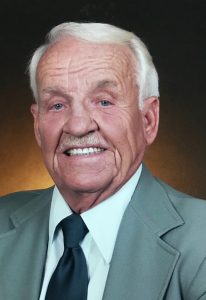 Van Earl Pace, 88, of Springfield, formerly of Lillian, AL and Peoria, passed away at Carle Foundation Hospital in Urbana at 11:25 p.m. on Monday, July 23, 2018. He was born December 9, 1929, in Rector, AR, to Zelmer and Eva (Clayton) Pace. He married Mary Garls on July 4, 1959. He later married Virginia Trice on June 24, 1983, and she preceded him in death in February 14, 2008. On March 2, 2017, he married Mary Karr and she preceded him in death on October 1, 2017. Mr. Pace is survived by two daughters: Patti (David Halpin) Pace-Halpin of Springfield, Vanessa (Dru) Bergman of Havana; three grandchildren: Molly Stinauer of Lewistown, Alex (Jessica Heffern) Bergman of Springfield and Trey (Katie Powers) Bergman of Havana; three great-grandchildren: Olivia and Elise Stinauer of Lewistown and Holden Bergman of Havana. Also surviving are three half-brothers: Terry Pace, Lannie Pace and Franklin Pace, all of Arkansas; one aunt, Virginia Clayton of Peoria and several first cousins, including: Michael Clayton of Peoria, Jeff Clayton of Houston, TX, Brent Clayton of Wynne, Arkansas, Trent Clayton of Camdenton, MO and FL Bache of High Springs, Florida; and also his best friend Chimi. He was preceded in death by his parents and several aunts and uncles. Mr. Pace was a former member of Shepherd of the Bay Lutheran Church in Lillian, AL. After high school, he served in the US Navy for four years. He retired from Caterpillar Inc., after thirty years of working the the factories in Peoria and Decatur. In retirement, he relocated to the Lillian, AL/Pensacola, FL area and ran his own sealcoating and parking lot striping business for the next thirty years. He was an avid sports fan, following Duke Basketball, the Golden State Warriors and especially the St. Louis Cardinals. Funeral services will be held at Hurley Funeral Home in Havana at 11 a.m. on Saturday, July 28, 2018 with visitation one hour prior to the services. Burial will follow the services at Swan Lake Cemetery in Peoria. Fr. David Whiteside will officiate. Memorial contributions may be made to the veterans’ organization of the donor’s choice, or American Red Cross. Online memorial messages may be left for the family at www.hurleyfh.com. Hurley Funeral Home in Havana is in charge of arrangements.