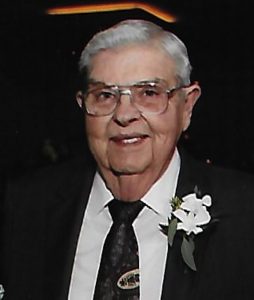 Winfred “John” Glunz, 86, of Lewistown, formerly of Henry, passed away at 8:30 a.m. Saturday, June 30, 2018 at OSF St Francis Medical Center in Peoria. He was born August 28, 1931 in Hopewell Township in Marshall County, the son of Louis and Eva (Welch) Glunz. He married Ann Marchesi on November 22, 1952. She survives along with their children, John (Deb) Glunz of Pekin, Roxane Hartle of Lewistown, Paula (Marty) Pickrel of Lewistown, Glenda (Bob) Ziegler of Cary, and Bill (Tony Linder) Glunz of Des Moines, IA; eight grandchildren, eight great grandchildren, two sisters, Beverly Wyatt and Norma (Jesse) Whited both of Laco;, and a host of nieces and nephews. He was preceded in death by his parents, one brother, two sisters, and one great grandson. John enlisted in the Marine Corps serving during the Korean War. He barbered for over 50 years and was frequently heard saying there was never a day he didn’t want to go to work. He enjoyed reading, vegetable gardening, fishing, watching college basketball, Jeopardy, and the St. Louis Cardinals. There was nothing he valued more than family, and he looked forward to their frequent gatherings that always included plenty of food, a large dose of good natured teasing and several games of cards. To him, family was everything. To his family, he was everything. Services will be held at 12 p.m. on Thursday, July 5 at Henry-Lange Memorial Home in Lewistown, where visitation will be held two hours prior to services. Burial will be in Oak Hill Cemetery. In lieu of flowers memorials may be made to St Jude Children’s Research Hospital. To view John’s life tribute video or to send condolences visit henrylange.com.