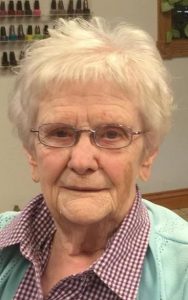 Helen L. Siguaw, 96, of Havana, passed away surrounded by her family at 8:09 a.m. on Thursday, June 14, 2018 at Havana Healthcare Center in Havana. She was born on December 14, 1921 in Havana, the daughter of Harry and Josephine (Miller) Hagney. Helen married John Siguaw on November 25, 1942 in Palmyra, MO. John preceded Helen in death on June 24, 2002. Also preceding her in death is her daughter, Sandra Payne, two brothers, Mike and Lawrence Hagney, and her sister, Margret Ann Hagney. Survivors include her two daughters, Joyce Siguaw of Lewistown and Kathleen (and Dan Windsor) Klinedinst of Astoria, five grandchildren, Tim (and Nancy) Payne, Craig (and Trisha) Vaughan, John (and Tiffany) Payne, Angela (and Steve) Cameron and Dianna (and Mike) Brown, six great-grandchildren, Hannah Brown, Spencer Brown, Austin (and Kaity) Cameron, Chad Cameron, Sydney Payne and Haley Payne, 1 great-great-grandson, Calvin Robert Cameron, two sisters, Grace Weaver of Norris and Ruby Agee of Havana, and her brother, Floyd (and Mae) Hagney of Havana. Helen was a homemaker. She also was a cook at South Fulton School and a Pink Lady at Mason District Hospital. She was a member of Grace Bible Church of Astoria. She did a lot of volunteer work and loved reading, embroidering, sewing and gardening. Services will be held at 11 a.m. on Thursday, June 21, 2018 at Shawgo Memorial Home in Astoria. Pastor Steve Hoover will be officiating. A visitation will take place one hour prior to the service on Thursday. Interment will be in the Laurel Hill Cemetery in Havana. Memorials may be made to Hospice Compassus of Peoria or Havana Healthcare Center.