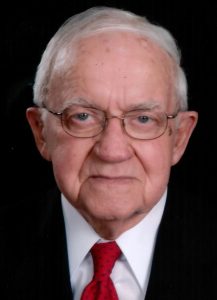 Orville W. Clark, 89, of Canton, passed away at 1:55 a.m. on Tuesday, May 22, 2018 at Graham Hospital. He was born May 8, 1929 in rural Canton to Sherman and Ruth (Lingenfelter) Clark. He married Harriet Corbin on June 24, 1950, she proceeded him in death August 29, 1985. He later married Elizabeth A. Bohannon on July 11, 1987, she survives. Also surviving are two daughters, Judy (Bill) Kemper of Canton, Janet (Tom) Rosinski of Scottsdale, Arizona, and one son, John Clark of Peoria, and two stepdaughters, Gail (Dan) Ludwigsen of Lake Zurich, and Sharon (Dave) Key of Morton. Also surviving are four grandchildren, Joshua (Kayleigh) Kemper, Kara (Dan) Fitzjarrald, Amanda (Cory) Nolan, and Rachel Rosinski and three great-grandchildren, Kate and Jack Fitzjarrald and Francis Kemper. He is survived by five step-grandchildren, Sarah and Timothy Ludwigsen, Emily and Lindsey Key, and David Kemper and four great step-grandchildren. Orville was proceeded in death by his parents and two brothers, Harold and Harry M. Clark. He was employed by Caterpillar, Inc. for 39 years in Peoria and Mapleton and retired in April 1986. He was a Blood Donor of 165 pints (20 gallons). He was a member of First Christian Church in Canton where he served as Deacon and in various leadership positions including Chairman of the Property Committee. He was a member of the FOC Sunday School class and men’s Tuesday morning bible study group. He also served as Director and Treasurer of East Elm Apartments. Orville loved his Lord and family dearly. He will be most remembered for his faith, sense of humor, amazing memory, honesty, and kind heart. Services will be held at 10 a.m. on Friday, May 25 at Sedgwick Funeral Homes & Crematory in Canton. The Elders of the First Christian Church, Kevin Dearing, Don Heller, and Norman Pollitt will officiate. Burial will follow the services at Bethel Cemetery in Rural Canton. A visitation will be held from 5 to 7 p.m. on Thursday, May 24 at the funeral home. In lieu of flowers, memorials may be made to the Canton Family YMCA or the First Christian Church of Canton. To view Orville’s DVD or to make online condolences you may go to www.sedgwickfuneralhomes.com.