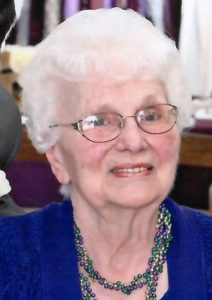 Olga E. Valencia, 96, of Canton, passed away at 11:30 a.m. on Sunday, April 22, 2018 at Graham Hospital. She was born on April 15, 1922 in Bryant, to John and Rosalie Zora (Potrebujes) Gurme. She married Anton “Tony” Valencia on July 20, 1946 in Canton. He preceded her in death on January 20, 2005. Olga was also preceded in death by her parents and five sisters, Angela Bausch, Frances Piercy, Mildred White, Marie Williamson, and Hilda Toncray. Surviving are two children, Jay (Susan) Valencia of AR and Alison (Warren) Wolf of Lewistown, eight grandchildren, and nine great-grandchildren. Olga worked as a telephone operator at Illinois Bell. She was a member of Trinity Lutheran Church, the Sarah Circle, and also taught Sunday school for 25 years. Olga loved to visit members of the church who were not able to attend Sunday services. She was an avid gardener and baker. Olga enjoyed fishing with the love of her life after retirement. Memorial service will be held at 5 p.m. on Sunday, May 6 at Trinity Lutheran Church in Canton. Pastor Micah Garnett will officiate. Cremation rites will be accorded with Sedgwick Funeral Homes & Crematory in Canton. Memorials can be made to Trinity Lutheran Church or the Activity Department Fund on 2 East at Graham Hospital. Private burial of ashes will take place at a later date. To make online condolences you may go to www.sedgwickfuneralhomes.com