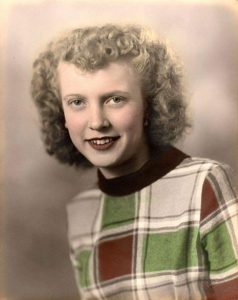 Idarose M. Easley, 85, of Ipava, passed away on Tuesday, April 10, 2018 at OSF St. Francis Medical Center in Peoria. She was born on August 27, 1932 in Peoria to Loa and Maude Danner. She married Lloyd Easley in 1954, and he preceded her in death on January 15, 1999. Surviving Idarose are two daughters, Janet (JR) Colston of Ipava and Linda (Mike) Blemler of Ipava; a son, Doug (Ivonne) Easley of Springfield; five grandchildren, Travis (Mandy) Colston, Jeremy (Kathey) Blemler, Jessa (Frank) Kajencki, Brittany (Manni) Villareal, and Catalina Easley; seven great-grandchildren; and one great-great-grandchild. She was preceded in death by her parents and husband. Idarose was a long-time housewife. She was also a waitress at Morrison’s Hideout in Ipava. She owned the Ipava Coin Wash and the Bernadotte Skating Rink, and was always willing to haul kids to and from when they wanted to skate. Always available to help out, Idarose helped with Ipava’s annual homecoming celebration and was very active in the community. She was an avid shuffleboard player with the American Legion and also played Pitch. She enjoyed trips to the gambling boat and cherished time with her family and friends. Services will be on Friday, April 13, 2018 at 11 a.m. at Shawgo Memorial Home in Astoria. Pastor Doug Krukewitt will be officiating. The visititation will be held from 5 to 7 p.m. on Thursday, April 12, also at the funeral home. Memorials may be made to the Ipava American Legion Auxiliary and the Ipava American Legion. Online condolences can be left for the family at www.shawgomemorialhome.org.