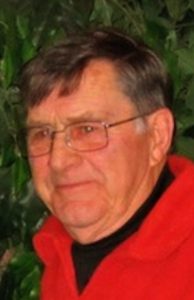 Raymond Lee “Ray” Merrill, age 78 of Havana, formerly of Bloomington, passed away peacefully the morning of Tuesday, March 27, 2018 surrounded by family at the home of his eldest daughter in Bloomington. Funeral services will be held at Beck Memorial Home in Bloomington on Friday, March 30. Pastor Brian Lesemann will be officiating. Visitation is from 10 a.m. to noon on Friday at Beck’s. Ray was born July 27, 1939 in Bloomington the son of Ray and Bonnie French Merrill. He married Kathryn “Kathy” Swick on February 14, 1993 in Covell. She survives him. Surviving are his brother Vernon (Sharon) Merrill of Heyworth, Bob Merrill of Bloomington; and his twin sister Vie (Ron) Hamilton of Bloomington along with his children Cindy Brown, Tim Merrill, Tammy (Mike) Brewer, Dawn Miles all of Bloomington; eight grandchildren; 12 great grandchildren and one great great grandson. Ray is preceded in death by his parents and one son, Ray Merrill. Ray retired on 1994 from Local #99 Plumbers & Pipefitters where he worked as a pipefitter and a business agent. After retirement Ray and Kathy moved to their home on the Illinois River where he enjoyed his passion of fishing, playing with his dogs and sitting on the porch watching the barges go by. Ray attended St. John’s Lutheran Church in Bath. He was a member of St. Paul’s Lutheran Church in Havana. Memorial contributions may be made in his name to his church home, St. John’s Lutheran Church, 10844 N CR 1400E, Bath, IL 62617.