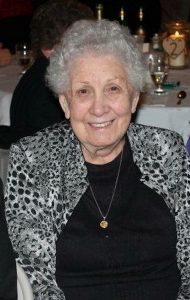 Mary Ellen Rennecker, 89, of Havana, passed away at her home at 4:48 a.m. on Wednesday, March 14, 2018. She was born October 8, 1928 in Havana, to Wesley Henry and Lanchen Mary (Wieburg) Trent. She married Robert H. Rennecker, in Havana, on July 22, 1950. He preceded her in death in 2004. Mrs. Rennecker is survived by one daughter, Angela (Doug) Nall of Chandlerville; one son, Robert Koert (Christine) Rennecker, of Kilbourne; three grandchildren, Clay D. (Tiki) Nall and Brooke (Chad) Trickey, both of Kilbourne and Chase Rennecker of Springfield; six great-granddaughters: Kristen, Alexis and Lauren Nall and Olivia, Amelia and Landry Ellen Trickey; sister, Sandra Ann Birchfield of Havana; brother, Donald “Abe” (Rita) Trent of Dixon, as well as several nieces and nephews. She was preceded in death by her parents, husband, two brothers, Frank “Bucky” Trent and Lewis C. Trent and one infant sister, Nancy Carol Trent. Mrs. Rennecker retired in 1993 from the Mason County Treasurer’s Office after 16 years of service. She was a member of the Mason County Genealogy Association and St. Paul’s Lutheran Church in Havana, where she was confirmed as an adult in 1951. She enjoyed fishing in her younger years and liked to garden and read. Her six great-granddaughters were her greatest joy. Funeral services will be held Monday, March 19, 2018 at St. Paul’s Lutheran Church in Havana at 11 a.m. with visitation from 9:30 until 11 a.m., prior to the services. Rev. Kevin Wendorf will officiate. Burial will follow the services at Laurel Hill Cemetery in Havana. Memorial contributions may be made to St. Paul’s Lutheran Church or the donor’s choice. Online memorial messages may be left for the family at www.hurleyfh.com. Hurley Funeral Home in Havana is in charge of arrangements.