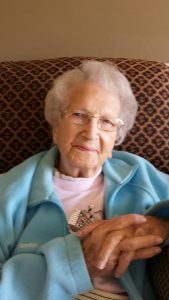 Anna Mae Adams, 90, of Mason City passed away on Monday, February 26, 2018 at the Mason City Area Nursing Home, surrounded by her family. She was born on September 18, 1927 in Mason City, the daughter of William and Isabell (Peck) Clifford. She married Leonard W. Adams on July 5, 1947. He preceded her in death on August 13, 1981, after 34 years of marriage. Anna Mae is survived by her children: Mike (Lynn) Adams of Washington, Illinois; Jeanne (Larry) McMasters of West Peoria; Carol (Mike) Elmore of Mason City; David (Becky) Adams of Mason City; Debbie (Don) Scheffel of McFarland, Wisconsin; Ruth Curry of Mason City; Karen (Roy) Wagner of Mason City, and Priscilla (Kevin) Green of Easton. She is also survived by 11 grandchildren: Kevin Unruh, Brett Adams, Sarah Butler, Michelle Hellman, Becky Willis, Nicole Scheffel, Jake Scheffel, Matt Adams, Alex Adams, Rachel Trinkle and Ryan Trinkle. She is also survived by 22 great grandchildren. Also surviving are two brothers, Russ Clifford of Easton and Dick (Carol) Clifford of Louisville, Kentucky. She was preceded in death by her parents and brothers, William Clifford Jr. and Jim Clifford. Anna Mae was a life-long resident of Mason City. She graduated from Mason City High School in 1945. She was a homemaker who loved working in her flower gardens and bird watching. She was an avid card player, winning her last game on February 11, 2018. She attended the Mason City Christian Church her entire life. She held weekly prayer cell meetings at her home for over 50 years. She was a prayer warrior, deaconess, and church youth leader for many years. She was a cornerstone of our family and will be dearly missed by her family and friends. A visitation will be held for Anna Mae on Thursday, March 1, 2018 at Hurley Funeral Home in Mason City, from 5 p.m. to 8 p.m. Funeral services will be held at the Mason City Christian Church on Friday, March 2, 2018 at 11 a.m. Rev. Dick Clifford will officiate. She will be laid to rest at Mason City Cemetery. Thank you to the staff at the Mason City Area Nursing Home for the loving care she received. In lieu of flowers, donations may be made to the Mason City Christian Church or the Activity Department at the Mason City Area Nursing Home.