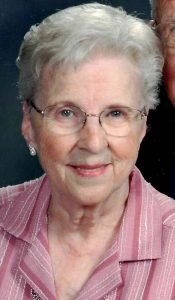 Marilyn F. Boyce, age 89, of Athens, passed away surrounded by her family on Sunday, January 21, 2018 at Sunny Acres Nursing Home in Petersburg. She was born on May 29, 1928, in Cloverton, MN, the daughter of Richard and Dorothy Harvey Gamble. She went to school in Sioux City, IA and to college in Wayne, NE where she met Richard “Dick” Boyce. She was active in sports and music. She loved being a water safety instructor and lifeguard. Marilyn taught school, worked for Athens State Bank, and worked as an Assistant Manager for Stuarts. Marilyn married Dick on June 14, 1953 in Sioux City, IA. They moved to Athens in 1976. He preceded her in death on November 20, 2010. She is survived by her daughter, Jerilyn Boyce of Springfield, and her children, Tyler and Taryn Fuchs; and her son, Rev. Bill Boyce (Gwen) of Havana, and their children, Andy, Katie (Ben) Dial, and Kellie; a great-grandson, Happy; and many nieces and nephews. She is preceded in death by her parents, three sisters, and three brothers. Marilyn was a long-time member of the Athens Christian Church. Visitation will be held on Friday, January 26, 2018 from 9 until time of funeral services at 11 a.m. at the Athens Christian Church. Rev. Ken Gennicks will be officiating. Burial will be held immediately after at Oak Ridge Cemetery in Springfield. Memorials can be given to Athens Christian Church. Mott & Henning Funeral Home is assisting the family. On-line condolences can be shared at www.mottandhenning.com.