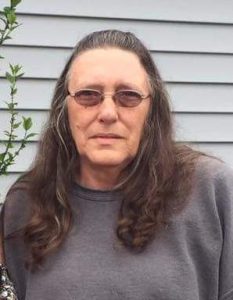 Vickie L. Showalter, 62, of Kilbourne, passed away at Mason District Hospital, in Havana, at 9:30 p.m. on Thursday, January 11, 2018. She was born November 16, 1955 to Lloyd L. “Bud” and Nelda (Severns) Freeman. She graduated from Easton High School in 1973. She married Terry Showalter on August 8, 1972, he survives. Also surviving are two sons: Chad of Kilbourne, Troy (Jennifer) of Ashland; granddaughter Alisyn of Havana; sister Jan (Stan) Hickle of Easton; mother and several nieces and nephews. She was preceded in death by her father as well as her mother-in-law and father-in-law. She was employed at Eaton Hydraulics and was a cook at various restaurants throughout her life. She was a talented seamstress and enjoyed making quilts and primitive crafts for her family and friends. One of her biggest joys was spending time with her granddaughter and nieces Kayleigh and Pyper. Cremation rites have been accorded and a visitation washeld at Hurley Funeral Home in Havana from 3 until 5 p.m. on Sunday, January 14, 2018. Memorial contributions may be made to Shriner’s Children’s Hospital or to a college fund for her granddaughter, Alisyn. Online memorial messages may be left for the family at www.hurleyfh.com. Hurley Funeral Home in Havana is in charge of arrangements.