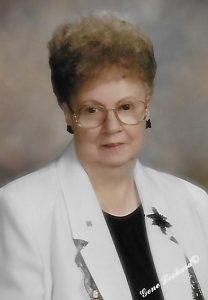 Betty R. Bump, 83, of Lewistown, passed away at 2:23 a.m. on Sunday, January 7 at Graham Hospital Extended Care. She was born May 23, 1934 at Canton, the daughter of Vivan and Mary (Butler) Haacke. She married Clifford F. Bump on May 22, 1955 at Lewistown. He preceded her in death on April 3, 2005. She was also preceded in death by her parents, and one daughter, Christy Picton. Survivors include one son, Craig (Lisa) Bump of Canton, four grandchildren, Curtis (Kylee) Bump of Lewistown, Sarah (Jeremiah) Phillips of Wamego, KS; Laura (Nathan) Barclay of Lewistown, and Barbara Bump of Canton, six great grandchildren, Jace and Jaxon Phillips, John and Luke Barclay, Wiley Gilmore, and Kaden Bump, and one sister, Anna Lee Deushane of Lewistown. Betty had worked for Dr. Smith and Dr. Thompson in Lewistown, and had also been the water clerk for the City of Lewistown. She started at Spoon River Towers as an Assistant Administrator and later became the Administrator before retiring. She was a member of the Illinois Street Christian Church in Lewistown. Services will be held at 1:30 p.m. on Wednesday, January 10 at Henry-Lange Memorial Home in Lewistown, with Reverend Mike Floyd officiating. Visitation will be held Tuesday from 5 to 7 p.m. at the memorial home. Burial will be in Fiatt Cemetery. Memorial contributions may be made to Graham Hospital Extended Care. Condolences may be made at henrylange.com.