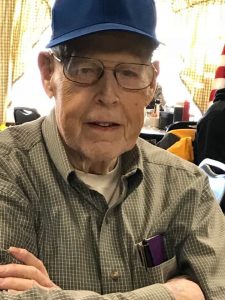 Robert L. Potts, 88, of Chandlerville, passed away on Wednesday, January 3, 2018 at Passavant Hospital in Jacksonville at 8:54 p.m. He was born January 22, 1929 in Lewistown to Bert and Myrtle (Blodgett) Potts. He married Gloria Marr on September 14, 1954 in Bath. She preceded him in death on August 17, 2017. Mr. Potts is survived by four children: Mike (Julie) Potts of Petersburg; Rhonda (Ron) Smith of Stonington; Eric (Debbie) Potts of Chandlerville; Bruce (Penny) Potts of Bath; seven grandchildren and ten great-grandchildren. Also surviving is one sister, Doris Kolves of Bath, and a stepbrother, Jack Lynch of Maquon. He was preceded in death by his wife, granddaughter, McKenzie Wieters Force and grandson, Nathan Potts. Mr. Potts graduated from Balyki High School in 1947. He served in the US Navy during the Korean War and was later an active member of the Chandlerville American Legion Post #694. He loved going for coffee and to eat at HollyWood’s Café with his friends. He retired from Illinois Power Co. after 43 years of employment. Visitation will be held at Lintner-Hurley Funeral Home in Chandlerville on Monday, January 8 from 4 to 6 p.m. Funeral services will be held on Tuesday, January 9 at 11 a.m., also at the funeral home. Memorial contributions may be made to American Legion Post #694, American Legion Auxiliary or St. Jude’s Children’s Research Hospital. Online memorial messages may be left for the family at www.hurleyfh.com. Lintner- Hurley Funeral Home in Chandlerville is in charge of arrangements.