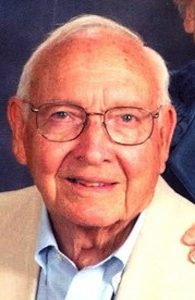 Major Landes, 98, of West Peoria, passed away at 8:15 a.m. on Friday January 5, 2018 at his residence. He was born on January 4, 1920 in Bath to Bert and Maude (Forsythe) Landes. He married Ruth E. Sanden in Peoria on June 28, 1942. She survives, along with one daughter Charmaine (Raymond) Curry of Brimfield, one grandson Michael (Robin) Heffron of El Paso, and two Great Grandchildren Olivia and Shelby Heffron, both of El Paso, and several nieces and nephews. He was preceded in death by his parents, one brother, and two sisters. Major was an Army Air Force veteran of WWII. He served in the Asiatic-Pacific Theatre, flying 41 bombing missions while there. He was a member of Salem Lutheran Church in Peoria. He worked in Machine Repair for Caterpillar Co. Inc., retiring in February of 1982 after 41 years of service. He loved feeding the birds and squirrels near his home. Funeral Services will be at 2 p.m. on Tuesday, January 9, 2018 at Davison-Fulton Woodland Chapel. Rev. Richard Wehrs will officiate. Friends may call upon the family from 1 to 2 p.m. on Tuesday prior to the services at the funeral home. Interment will be in Parkview Cemetery. Memorials may be made to the Salem Lutheran Church or to the West Peoria Fire Department. On-line condolences and tributes may be made at www.Davison-Fulton.com.