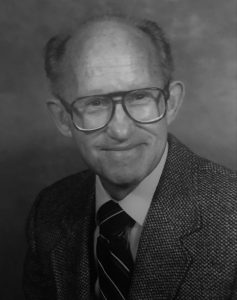 Richard G. Bjorklund, 89, formerly of rural Topeka, entered eternal life on Friday, December 29. He was born in Milwaukee, WI, on February 10, 1928 to Sidney and Mildred (Zimmer) Bjorklund. He served in the Philippines with the U.S. Army from 1945-1947. He received his B.S. and M.S. degrees from the University of Montana and his Ph.D. from the University of Michigan. He began teaching biology at Bradley University in 1957 and spent his entire career at Bradley. He served as Chair of the Biology Department and as Dean of the College of Liberal Arts and Sciences. He was awarded the Putnam Award for Excellence in Teaching, was named Distinguished Professor, and then Professor Emeritus after his retirement in 1992. Richard served as a founding member of the Board of Trustees of Lakeview Center for the Arts and Sciences, a member of the Board of Directors of the Sun Foundation, the Board of Directors of the Heartland Water Resources Council, and the Illinois State Academy of Science Council. He was a member of numerous conservation-related organizations including the Emiquon Audubon Society, the Illinois Audubon Society, the National Audubon Society, the Illinois Ornithological Society, Sierra Club, and Ducks Unlimited. Much of Richard’s research was focused on ornithology, including gathering data and conducting research for nearly 50 years at Illinois River heronries. After his retirement, Richard developed the Walden West Land and Water Reserve on his 44 acres adjacent to the Sand Ridge State Forest in Mason County. He maintained and increased species diversity of mammals, birds, herptiles, invertebrates and plants on restored sand prairie, sand oak savanna, and mixed deciduous/coniferous woodland. He used the land for leading field trips and giving students and faculty at Bradley an opportunity for research. He conducted weekly waterbird surveys for 18 years for the U.S. Fish and Wildlife Service at the Chautauqua National Wildlife Refuge, volunteering over 10,000 hours. Richard enjoyed classical music, was a devoted Bradley Braves and Green Bay Packers fan, and eagerly anticipated time spent with his family. Richard is survived by his former wife and life-long friend, Marjorie Bjorklund; his children: Bonnie (Norman) Frankel, Sigurd (Beth) Bjorklund, Wendy Bjorklund, Jill (Pete) Hanley, and Eric Bjorklund; six grandchildren: Matthew (Jessica) Hirsch, Edward Hirsch, Andrea (Jason) Hoang, Alison (Jonathan) Russell, Paul Hanley, and Emily Hanley; seven great-grandchildren; a sister, Patricia Efflandt; and a number of cousins, nieces, and nephews. He was preceded in death by his parents and a brother, William Bjorklund. A Mass of Christian Burial was held on Saturday, January 6, at 11 a.m. at St. Barnabas Episcopal Church in Havana, with Father Michael Newago officiating. Cremation rites have been accorded with services provided by the Hurley Funeral Home in Havana. A private family committal service will be at a later date. Memorial donations can be made to St. Barnabas Episcopal Church (424 N. Plum St., Havana, IL 62644) for children and youth ministries, or to Bradley University (1501 W. Bradley Ave, Peoria, IL 61625) designated for the Bjorklund Student Research Fund.