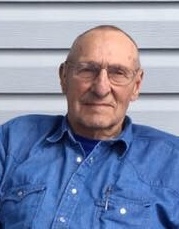 Marvin “Bud” Paul Huber, 88, of Easton, passed away Tuesday, December 26, 2017 at the Abraham Lincoln Memorial Hospital. He was born October 18, 1929 in Kilbourne, Illinois the son of Alvin and Bessie (Williamson) Huber. He married Rose Mary Giehl in Port Hueneme, California on June 26, 1952, she survives. Also surviving are six children: Patti Strader of Easton, Stephen (Eileen) Huber of Elmwood, Jim (Lori) Huber of Sherman, Cathy (John) Scarcliff of Canton, Bill (Debbie) Huber of LeRoy and Karen (Rob) Leinweber of Easton. Bud is also survived by nine grandchildren and two great grandchildren and five siblings: Marilyn Seacrist of Creve Coeur, Lyle Huber of Havana, Leland (Ilse) Huber of Columbia, SC, George (Nancy) Huber of Huntley, IL and Larry (Sandy) Huber of Huntley, IL. He was preceded in death by his parents and two brothers: Robert Huber and Donald Huber. Bud was in the United States Navy Seabees and proudly served his country. He was a member of the Holy Family Catholic Church in Lincoln. He was an avid Chicago Cubs Fan and enjoyed gardening, hunting and fishing. He loved farming and worked for the Mason County FS for 27 years. Funeral services will be held on Saturday, December 30 at Hurley Funeral Home in Mason City at 11 a.m. Visitation will be one hour prior to the services beginning at 10 a.m. Burial will be at the Easton Cemetery. Memorial contributions may be made to Easton Park District. Condolences for the family can be left online at www.hurleyfh.com. Hurley Funeral Home in Mason City is assisting the family with arrangements.