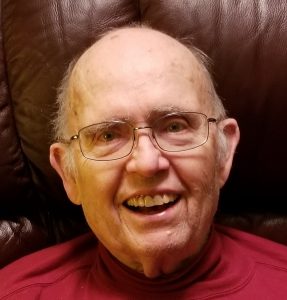 Robert Paddack, 82, went to meet his Lord on December 22, 2017 at the Mason City Nursing Home with the loving care of his family, the Nursing Home Staff, and Hospice. He was born in Sayre, OK on Dec. 13, 1935 to Alba and Helen Simmons Paddack. He married Elizabeth “Lisa” Brown Paddack on July 25, 1956 in Wray, CO. She survives. Robert prepared for his life as a church pastor at Phillips Univ. and Seminary, Enid, OK from where he graduated in 1981. During that time he served student pastorates at Geuda Springs and Ashton, KS, and Amorita, OK. He served the Christian Church in Henrietta, NY for five and a half years, followed by a pastorate at the First Christian Church in Mason City, for 34 years, retiring in the year 2000. He is survived by one daughter and two sons: Cindy (Paul) Musgrave of Wray, CO; Bruce (Lesa) Paddack of Greenwood, IN; and Bryan (Susan) Paddack of Odessa, TX. There are 7 beloved grandchildren and 13 great-grandchildren. He was active in the community: serving on the Mason City Area Nursing Home, the County Health Board, Mason City Church Association, member of Optimist Club, Masonic Lodge, and Rotary Club. Visitation was on Tuesday, December 26 at Hurley Funeral Home in Mason City from 5 to 7 p.m. The Celebration of Life Worship Service was on Wednesday, December 27 at 10 a.m. at the United Presbyterian Church in Greenview with Pastors Stephanie McCullough of Greenview and Bill Boyce of Havana officiating. Memorial gifts may be made to the Greenview Presbyterian Church, the Mason City Christian Church, or the Mason City Area Nursing Home. Condolences for the family can be left online at www.hurleyfh.com. Hurley Funeral Home in Mason City is assisting the family with arrangements