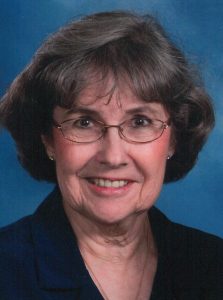 Ila Jean Owens, 82, of Canton passed away on December, 4, 2017, at Red Oak Estates in Canton. She was born on April 28, 1935 in her home on a farm near Bushnell to Ralph and Gratia (Campbell) Yocum. She married Jim Owens on October 23, 1955 at her parents’ home near Marietta. He survives. Also surviving are four children: Michael Owens (Nguyen Hai Anh) of Frankfurt , Germany; Rebecca Billiter (Kirk) of Bloomington; Kirk Owens of Champaign; and Gina Spahn (Greg) of Canton. Also surviving eight grandchildren, Ketra Moore; Colton Hinderliter; Kiefer Owens; Ruthie Mathewson; Elizabeth Spahn; Olivia Spahn; Owen Spahn; and Michael Vinh Nguyen Owens. Six great-grandchildren survive as well. Ila Jean was preceded in death by her parents and one sister, Dana Rosalyn. Ila Jean was raised on a farm near Marietta. She attended Marietta and Smithfield grade schools . She was homecoming queen at Cuba High School and graduated from Cuba High school in 1953. Ila Jean worked at the Cuba State Bank from 1953-1957. Following the birth of her oldest son, Ila Jean chose to be a homemaker; caring for her family throughout her life. She was a strong, loving, caring, intelligent and a classy woman. She enjoyed cooking, baking, crocheting, antiquing, and always loved listening to country music. She was a staunch St. Louis Cardinal baseball and Fighting Illini basketball fan. Her husband Jim stated,”In my heart, nothing I could write would do her justice! Sugar and spice and everything nice is what Ila Jean was made of.” Funeral services will be held on Saturday December 9, 2017, at 11:00 a.m. at Oaks-Hines Funeral Home in Canton. Visitation will be held one hour before the service. Pastor Micah Garnett will officiate. Burial will follow at Marietta Cemetery. In leu of flowers, memorials can be made to CurePSP, St. Jude, or Trinity Lutheran Church in Canton. The family would like to thank Red Oak Estates and Hospice for their care of Ila Jean. To make online condolences or to view Ila Jean’s video tribute, please visit www.oakshinesfuneralhome.com.