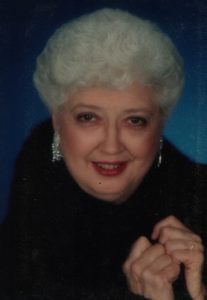 Beverly June Steele, 88, of Havana, passed away at her home at 5:16 p.m. on Thursday, November 30, 2017. She was born June 20, 1929 in Pekin, IL to Herbert and Ethel (Wooddell) Haslam. She married Philip T. Steele on April 30, 1955 and he preceded her in death on February 2, 2006. Mrs. Steele was preceded in death by her parents, brother and husband. She owned and operated Haslam’s Cleaners, in Havana, for 19 years. She graduated from Bob Jones Academy in Greenville, SC and attended Bradley University in Peoria. She had worked for New Method Cleaners in Anchorage, Alaska and Marshall Fields in Seattle, Washington. Mrs. Steele was a member of 1st United Methodist Church in Havana. She was Preceptor of MU Chapter #391 and Exemplar Preceptor of Beta Sigma Phi. A memorial service will be held at 11:00 a.m. on Thursday, December 7, 2017 at the 1st United Methodist Church in Havana. Visitation will be held from 10:00 until 11:00 a.m., also at the church. Rev. Jame Hahs will officiate. Cremation rites have been accorded and burial will follow at Cuba Cemetery at a later date. Memorial contributions may be made to 1st United Methodist Church or Best Friends Animals. Online memorial messages may be left at www.hurleyfh.com. Hurley Funeral Home in Havana is in charge of arrangements.