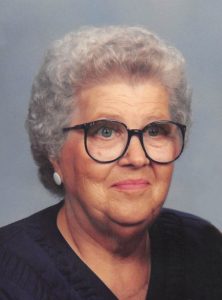 Guyneth Elinor Neikirk, 93, of Pekin, formerly of Forest City, passed away at 10:55 p.m. Tuesday, November 28, 2017 at Hallmark House Nursing Center in Pekin. Born April 18, 1924 in Havana to Guy and Cora (Akridge) Howell, she married Marvin Neikirk on March 23, 1941 in Forest City where she resided until moving to Pekin after her husband’s death in 2012. She also was preceded in death by her parents; one son, Marc Howell Neikirk and two sisters, Florence Long and Helen Sarff. Surviving are one daughter, Nanciann (Larry) Cedarquist of Pekin; seven grandchildren, Scott (Kelly) Cedarquist, Bradley (Jodi) Cedarquist, Jeff Neikirk, Walter (Beth) Neikirk, Dru (Margie) Neikirk, Benjamin (Angela) Neikirk and Susan (Julian) Brewington and twelve grandchildren. She also leaves a daughter-in-law, Phyllis Neikirk. Guyneth was actively involved in the family farm and business. She was a rural mail carrier for 25 years. She also was interested in politics, serving as Mason County Democratic Chairwoman. Guyneth served on the Forest City Village Board and during her 12 years as Village Clerk, she was instrumental in helping establish the village water system. She was a member of Forest City Community Church. Guyneth had a passion for Swarovski crystals and making handcrafted jewelry. Her creations became a proud achievement, and the social contact was always the reason for her involvement. At John Evan’s Supportive Living, she became known as the “Jewelry Lady.” Her funeral will be at 10:30 a.m. Saturday, December 2, 2017 at Preston-Hanley Funeral Homes & Crematory in Pekin. Deacon William Meyer will officiate. Visitation will be one hour before the funeral at the funeral home. Graveside services will be at 2:30 p.m. Saturday at Laurel Hill Cemetery in Havana. Memorial contributions may be made to Forman Fire Protection District, 205 North Broadway, Manito, IL 61546 or to Forest City Community Church, 203 West Market, Forest City, IL 61532. The family would like to offer a special thanks to the caring staffs at John Evans, Hallmark House and Hospice Compassus. To express condolences online, visit www.preston-hanley.com