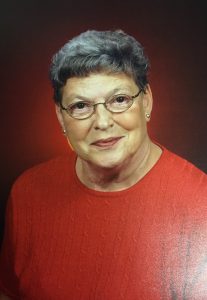 Ruth V. Shipp, 85, of Mason City, passed away at 11:40 p.m. at Mason City Area Nursing Home on November 6, 2017. She was born on September 26, 1932 in San Jose, the daughter of Henry and Naoma (Boeck) Handke. She married A. Leon Shipp on June 25, 1950 at St. Luke’s Church in San Jose. He preceded her in death on May 25, 1991. She married Ray C. Leamon on August 14, 1993. He also preceded her in death in 1995. Ruth is survived by five children, Jay (Kate) Shipp of Chonburi, Thailand and his children: Sam and Alvin Shipp, a daughter, Jean (Bobby) Thomas of Mason City and their children: Drew (Jaymie) Thomas, Dirk Thomas both of Myrtle Beach, SC and Brooke Thomas of Ft. Myers, FL, two great grandchildren, Henry and Lila Thomas, Jan (Steve) Krause of Mason City and their children: Jack Krause of Carbondale and Jeff Krause of Easton, Jill (Jay) Cave of Easton and their children: Abby (Eric) Haberer of Scottsdale, AZ, Audrey (Tim) Brantner of Chatham and Annie (Lucas) Baugher of Virginia Beach, VA, and a great grandchild, Griffin Brantner and Jon (Teri) Shipp of Westwood, MA and their children: Jacki (Mike) Melkonian of Boston, MA, Adam Shipp of South Hadley, MA and Kristin Shipp of Westwood, MA, one sister, Mary Scher of Chesterfield, MO, and many nieces and nephews. She was preceded in death by her parents, and one sister, Martha Todd. Ruth was a member of the Christ Lutheran Church in Mason City. She worked for the Secretary of State as an office manager and co-owned Shipp’s Appliance Center. A Memorial Service will be held for Ruth on Tuesday, November 14, 2017 at 10 a.m. at Christ Lutheran Church in Mason City. Pastor John Johnson will officiate. A visitation will be held on November 13 from 5 to 7 p.m. at Hurley Funeral Home in Mason City. Memorials may be made to Christ Lutheran Church, Mason City Area Nursing Home, or to an organization of the donor’s choice. Online condolences may be left for the family at www.hurleyfh.com Hurley Funeral Home in Mason City, IL is assisting the family with arrangements.