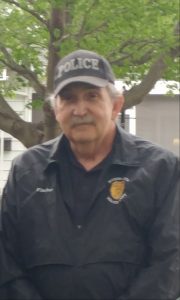 Jack Fischer, 65, of Mason City, passed away October 17, 2017 at his residence. He was born March 18, 1952 the son of Lawrence and Wilma (Russell) Fischer. He married Joy Shaw on January 13, 1972 in Pekin. She survives. Also surviving are three children: Amy Fischer of Mason City, Jack Fischer II (Tricia) of Topeka and Shawn Fischer (Katrina) of Pekin, eight granddaughters and one grandson. Jack is also survived by six sisters, three brothers and many nieces and nephews. He was preceded in death by his parents, three brothers and one sister. Jack served in the United States Army. He dedicated 29 years of service to law enforcement, retiring May 4, 2017 as Chief of Police of Mason City. Jack enjoyed camping, fishing, hunting, NASCAR and the Chicago Bears. His greatest joy was spending time with his famiy. Following his wishes, cremation rites have been accorded. There will be no services held at this time. Memorial contributions may be made to the family to help with funeral expenses. Online condolences for the family may be left at www.hurleyfh.com. Hurley Funeral Home in Mason City is assisting the family with the arrangements.