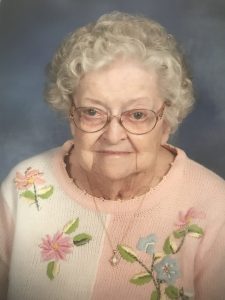 Ruth E. Hoff, 100, of Havana passed away at 2:55 a.m. on Saturday, September 9, 2017 at Havana Health Care. She was born on May 22, 1917 in Fulton County to John and Bertha (Barnett) Arundale. On December 31, 1942 she married Howard Hoff in Palmyra, MO who preceded her in death on March 6, 2012. She is survived by several nieces and nephews and great nieces and nephews. Ruth was preceded in death by her parents, husband, 3 brothers: Clarence, Clyde and Karl Arundale and 2 sisters: Mary Nims and Bernice Wolters. Ruth was a member of the 1st United Methodist Church in Havana. She worked for Bell Telephone Company for 32 years before retiring in 1971. After retirement she and Howard spent winters in Arizona for many years. During that time Ruth took up her beloved china painting and continued painting for 40 years. She is known by many for her beautiful rose paintings and was recognized several times, having her china shown at the National China Museum. Funeral services will be held at the 1st United Methodist Church in Havana at 11 a.m. on Wednesday, September 13, 2017 with visitation one hour prior to the services. Burial will follow the services at Laurel Hill Cemetery in Havana. Rev. Jame Hahs and Pastor Daniel Swihart officiating. Memorial contributions may be made to the 1st United Methodist Church in Havana. Online condolences may be made at www.hurleyfh.com