Donald J. Nannen, 93, of Mason City passed away at 4:20 a.m. on September 6, 2017 at the Mason City Area Nursing Home. He was born on April 12, 1924 in Delavan the son of Ben and Edith Nannen. He married Hazel R. Dorsey on November 13, 1943 in Houston, TX. and she preceded him in death on January 2, 2015. Two sons Donald B. Nannen and Gary L. Nannen also preceded him in death. Surviving are one son Ben Nannen of Mason City and two daughters Linda S. (Ronald) Knollenberg and Beverly (Merle) Ratliff both of Mason City. Don has eight grandchildren and nine great grandchildren. Donald farmed and raised livestock in the Mason City area from 1944 to 201 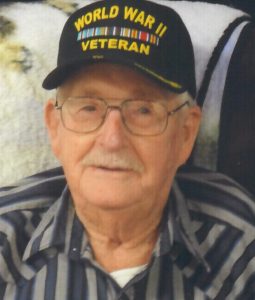 6. He was a WW II veteran having served in the U.S. Army. He was a member of the American Legion Post# 496 in Mason City where he served as Post Commander for many years. He was active in the Mason Co. Fair and was superintendent of the sheep department. Don enjoyed music, dancing and his family especially his grandkids and great grandchildren. Funeral services will be at 11a.m. Saturday September 9, 2017 at the Assembly of God Church in Mason City. Rev. James Sprinkle will officiate. Visitation will be from 9 to 11 a.m. prior to the service at the church. Burial will be in Mason City Cemetery. Military rites will follow the graveside service conducted by the Mason City American Legion Post #496. Memorials may be made to the American Legion Post #496 in Mason City. To leave an online condolence go to www.hurleyfh.