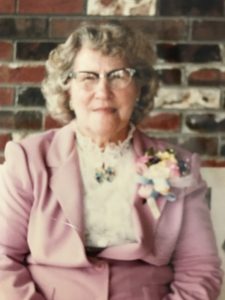 Olive Anna (France) Howe, 104, of Havana passed away on Saturday, August 26, 2017 at Havana Health Care. She was born on October 7, 1912 in Fulton County the 4th child of Hugh and Susie (Farwell) Curless. She married Neville France on August 9, 1930 he preceded her in death on December 17, 1959 she then married Alex Howe on October 8, 1967 who preceded her in death on April 23, 1974. She was preceded in death by both her husbands, 2 sons: Keith and Kenneth France, daughter Gloria Heaver, granddaughter Merri Beth Potts, great-granddaughter Heather Hendricks and great great grandson Brandon Otto, 3 sisters and 4 brothers. Olive is survived by 2 daughters: Carol (Donald) Irwin of Ft. Walton Beach, FL. and Mary (Harold) Potts of Havana, 3 sisters: Edith Lee of Golden, Myrna Phillips of Astoria and Doris Robertson of Ipava. Also surviving are 18 grandchildren, many great grandchildren and many great great grandchildren. In her early life, she was a farmer’s wife and mother during the depression. She was a cook and home maker to 5 children, she loved her large family. In her later years she enjoyed traveling and sightseeing. She enjoyed her children’s large families. A funeral service will be held on Wednesday, August 30, 2017at Noon with Pastor Sue Roat officiating, visitation will be from 10 a.m. until the time of service at Noon at Hurley Funeral Home in Havana. Burial to follow at Laurel Hill Cemetery in Havana. In lieu of flowers Memorial contributions may be made to the Donor’s Choice. Online condolences may be made at www.Hurleyfh.com Family and Friends are invited to the VFW in Havana for a mean after the services.