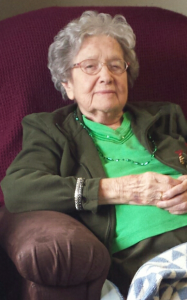 Annis B. Tracy, 96, died on July 24, 2017 at 8:03 a.m. at Mason City Area Nursing Home. She was born March 17, 1921, the daughter of William Porter and Blanche Perkins Garrison. She
married Ray F. Tracy in Mason City on September 24, 1939. She was preceded in death by her husband Ray; daughters Connie Tracy and Joan Evans; and her grandson, Tim Brinner. Surviving her are five children: Bob Tracy of Galesburg, Kay Zimmerman, Elaine Long, Steve (Mel) Tracy, all of Mason City and Tina Harrison of Bloomin
gton. Also survived by 12 grandchildren, 23 great grandchildren, and three great-great grandchildren; several nieces and nephews; and her special sister-in-law, Betty Garrison. She was a devoted farm wife; and a Deaconess of The First Christian Church for many years. At age 50 she returned to school and earned her GED. Memorials may be made to The Community Chapel or charity of choice. Arrangements pending with Hurley Funeral Home in Mason City.