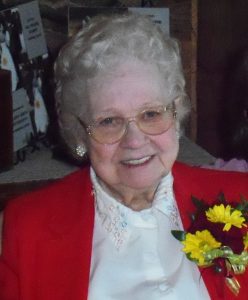 Mary Roberta (Anderson) Stroh went home to be with the Lord on June 10, 2017, at the age of 97, surrounded by her family in her home in Oakford. Roberta was born Oct 25, 1919, in rural Cass County. She was the second of ten children born to Roscoe “Jack” Phineas Anderson and Virgie Lena (McHenry) Anderson. She married Donald Leroy Stroh of Oakford on March 4, 1939, at The Little Brown Church in Nashua, Iowa. She was preceded in death by her beloved husband, Donald, on December 12, 1999. Donald owned Stroh Oil Co. in Oakford and after they were married Roberta became the bookkeeper. Later, Don and Roberta owned and operated the Stroh-Anderson Ready-Mix Co., and the New Salem Coca-Cola Bottling Co., both in Petersburg. She and Don were avid Pinochle players and she enjoyed playing double-deck Pinochle with her ladies’ card club until age 96. Roberta was a 4-H leader in the Oakford area and an active member of the Farm Bureau’s Homemakers Association. She also was an active member of the Menard County Fair Board Wives Group who planned all the programs for the Women’s Pavilion during the Fair. She was a member of the Oakford United Methodist Church and enjoyed participating in many of their fundraisers until her husband became ill. In 1985, Don and Roberta purchased a concession trailer that they took to local fairs and festivals. This business was known as Stroh’s Cone Castle. In addition to working in her concession trailer, Roberta’s favorite pastime was spending time with her grandchildren and great-grandchildren. Although Roberta was unable to attain her dream of attending college, she recognized the importance of higher education for women and ensured that each of her children and grandchildren graduated from college. Roberta was preceded in death by her husband, Donald; her parents; and two sisters: Mildred Lucille (Anderson) Lutes (Paul “Ham”-deceased); Phyllis Eleanor (Anderson) Leinberger (John-deceased) and two brothers: Randall Paul Anderson and Roscoe Arthur “Art” Anderson (Jackie-deceased). She is survived by her two daughters: Brenda Vost (formerly Magee) of Springfield, and Sandra Newman (Bob) of Tallula; Granddaughters: Stephanie (Magee) Webster (Tony) of Springfield; Rebecca (Magee) Pluta (James) of Crofton, Maryland; and Kimberly (Newman) Tomasko (Sean) of Ashland; Great-Grandchildren: Anika, Kyra and Peyton Webster; Shaylyn and Anderson “AJ” Pluta; and Lillian Tomasko. Also surviving are her sisters: Virginia Winkelmann (Otto “Wink”-deceased) and Esther Fricke (Gilbert “Gib”-deceased); and brothers: Gerald “Andy” (Josephine “Jo”-deceased), Robert “Bob” (Wanda), and Eugene “Bugeye” Anderson (Glenda); and many beloved nieces and nephews. Roberta’s family would like to thank some special angels who helped Roberta so much over the years, including Rita Coffey of Petersburg, Grady and Susie Smith, MaryAnn Duncheon and Rick Boensel, all of Oakford. Visitation will be held at Hurley Funeral Home in Petersburg from 5 to 7 p.m. on Monday, June 12. Funeral services will be held at the Oakford United Methodist Church at 10 a.m. on Tuesday, June 13, with burial immediately following in the Oakford Cemetery. Memorials may be made in honor of Roberta to the Building Fund at the Oakford United Methodist Church or to a charity of the donor’s choosing.