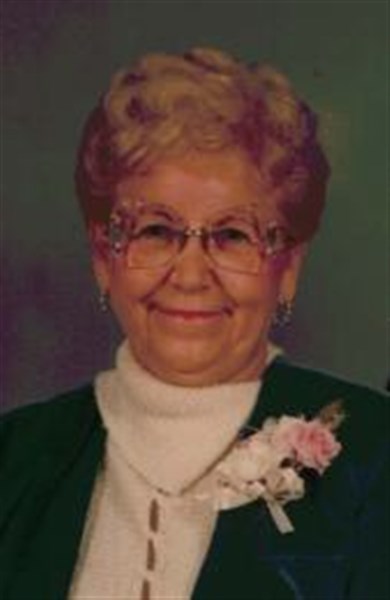 Betty L. Hamm, 92, of Bath, IL went to be with her Lord at 1:45 PM Thursday, April 14, 2016 at Lewis Memorial Christian Village in Springfield, IL. She was born July 16, 1923 the daughter of Joseph and Hazel (Bullock) Hamm in DuQuoin, IL. She married Dale C. Hamm on January 7, 1970 in Macomb, IL. He preceded her in death on January 30, 2001.
Betty is survived by one step daughter, Marilyn Ford of Canton, IL, one step son, Ronald Hamm or Peoria, IL, ten step grandchildren and twenty step great grandchildren, special cousins, Susan (Mark) Stoddart of Springfield, IL, Ed (Gay) Graves of Swansea, IL, and Edward (Judy) Collins of Springfield, IL. She was preceded in death by one step daughter, Carolyn Sue Tarvin, and one step son Donald Hamm and her friend Charles Ushman.
Betty was a member of the Methodist Faith Church in DuQuoin, IL, and the VFW of St. Joseph, FL. She loved the outdoors and was a renowned artist in Central, IL.  Prior to her marriage she worked for Pillsbury Mills and later Lynch Insurance Adjusters both in Springfield.
Funeral services for Betty will be held at Hurley Funeral Home in Havana on April 18, 2016 at 2:00 PM with visitation one hour prior to the service beginning at 1:00 PM. Rev. Jame Hahs will officiate. Burial will follow at Sheldons Grove Cemetery in Browning, IL.
Online condolences may be left for the family at www.hurleyfh.com.
Hurley Funeral Home in Havana, IL is in charge of the arrangements.