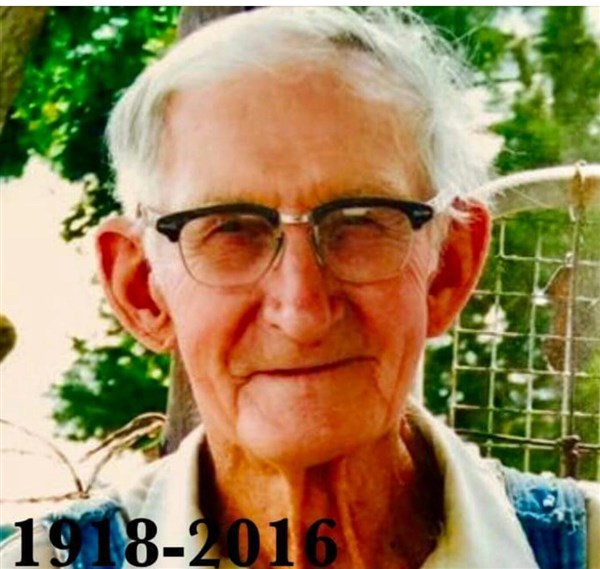 Howard Charles Williams, 98, of Kilbourne, passed away at his home at 10:19 a.m. on Monday, February 29, 2016. He was born September 3, 1917 near Havana, IL to Carl H. and Anna Marie (Bontjes) Williams. He married Eldene Stith of Atterberry, IL on August 31, 1940 in St. Charles, MO at King’s Highway Baptist Church.
Mr. Williams is survived by three daughters, Dorothy, Esther and Nancy Williams, two sons, George and Robert Williams, four grandchildren and four great-grandchildren. He was preceded in death by his parents, three brothers, Julius, Harry and Carl Williams Jr., wife, Eldene, and two sons, Howard Jr. and Paul Williams.
He was a farmer his whole life in Mason, Menard and Cass Counties, starting at age 15 with his dad and grandfather. He worked at the State Tree Nursery for five years and helped different local farmers with farm work and on township roads. He also assisted in getting phone service to the Kilbourne area. He did custom work with corn picking and combining grain, livestock hauling and custom sawing. He was a member of the 1st Assembly of God in Havana.
Visitation will be held at Hurley Funeral Home in Havana from 5 until 7 p.m. on Wednesday, March 2, 2016. Funeral services will be held at the 1st Assembly of God in Havana at 10 a.m. on Thursday, March 3, 2016. Burial will follow the services at Oakland Cemetery in Petersburg. Rev. Paul Homan will officiate.
Memorial contributions may be made to Harbor Light Hospice or the 1st Assembly of God Church in Havana. Online memorial messages may be left for the family at www.hurleyfh.com.
Hurley Funeral Home in Havana is in charge of arrangements.