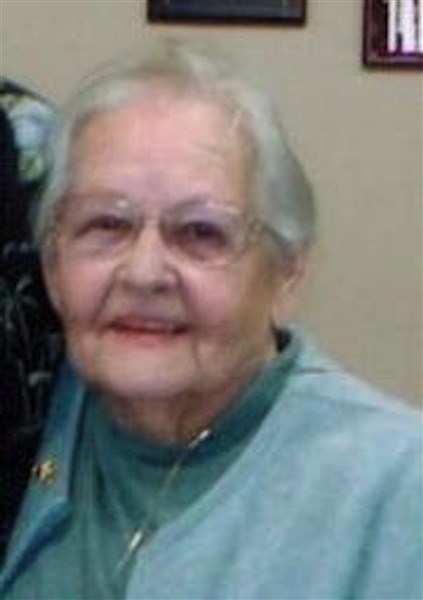 Marcella Catherine Pike went to be with her Lord on February 2, 2016. Marcella “Marcie” was born April 7, 1925 to John Barber and Catherine Regan Smith at Palmyra, Illinois.  She married Robert Bruce Pike on September 4, 1948 in Springfield, Illinois.  She attended Oak Grove Elementary School and graduated from Auburn High School.  She worked at Illinois National Bank for six years and the National Bank of Petersburg for 28 years before retiring in 1987.
She was preceded in death by her only child, Wayne Bruce Pike in 1995 and her husband of 60 years, Bruce Pike, in 2008.  Also preceding her in death were her parents; siblings Rita Ann Pike, Patricia Puma, and John B. Smith; nephews Dennis E. Pike and Donald E. Pike; and sister in law Beth Ann Smith.
Marcie is survived by two granddaughters, Jennifer E. (Matt) O’Brien, Stacie L. (Ryan) Marcum, Grandson Ryan B. Pike, 2 great-granddaughters, three great-grandsons, several nieces, nephews, and cousins.
Marcella will long be remembered for her help with cancer patients.  Her favorite pastime was playing cards, especially Pinochle with her friends, and baking pies for special occasions.
Services for Marcella will be Friday, February 5, 2016 at Hurley Funeral Home in Petersburg.  Visitation will be held at 12 Noon and Funeral Service at 1 PM.  Interment will follow at Rosehill Cemetery in Petersburg IL.  In lieu of flowers, donations may be made to American Cancer Society or any charity of donor’s choice.  Online condolences may be left for the family at www.hurleyfh.com.  Hurley Funeral Home in Petersburg Illinois is assisting the family with arrangements.