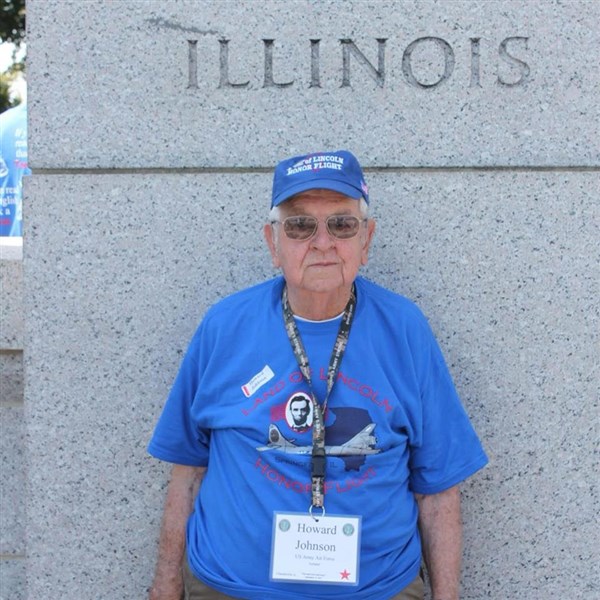 Howard Marion Johnson of Chandlerville passed away on December 25, 2015 at 9:30 pm at Passavant Hospital in Jacksonville.
He was the son of William “Euwell” and Bertha Mahalia (Thompson) Johnson.  He was born in Mason County, Illinois just across the Sangamon River from Chandlerville on March 23, 1927.
Howard lost his father at the early age of 6 months.  His mother (Bertha), sister (Berneice) and brother (Harold) moved to Chandlerville where his mother worked odd jobs (laundry, cooking) to support her family.  Howard and his brother did many jobs as they grew up such as collecting bait for the local fisherman.
He went to Chandlerville High School and never missed a day.  During school, he played basketball, baseball and track for the Chandlerville Comets.
Upon graduation in 1945, he joined the Army Air Force.  After basic training at Fort McClellen Alabama and Camp Picket Virginia, he was assigned to Iceland as an administration specialist.  He went to Paris, France for 24 days of R&R but went back to Iceland.  He returned statewide through Westover Field Massachusetts and was discharged as a Staff Sargent.
After returning from the military, he worked for the Regional Service Center in Illiopolis, Caterpillar in Peoria, and Lincoln Ordinance in Springfield.  He went to work for Mr. Arthalony in the West Food Store in Chandlerville.  When Mr. Arthalony decided to retire, he supported Howard in being named Manager of the store – one of the youngest Managers in the West Food Chain.
He met Margaret Ann Foote of Jacksonville in a bowling alley when one of his grocery supply men introduced him.  He married her on February 14, 1960 in Jacksonville at Grace United Methodist Church.  With his wife, they opened a little ice cream stand (Dairy Dip) which later expanded to a restaurant which his brother and him built (now Hollywood’s Cafe). Margaret gave birth to their first daughter, Alicia Ann who had lung problems and passed away 15 days after her birth. Several years after, Margaret gave birth to their daughter, Janna Marion.   Margaret preceded him in death on January 23, 2010.
After the death of his sister, Howard and his wife took in their two nieces, Bertha and Jessie.  Both Howard and Margaret thought of the two nieces more as their children than nieces. They started the process for restoring the old Marcus Chandler house on South Main St. to fit the expanded family.  Howard and Margaret also fostered two children, Sheryl Conway and Hal Pollard.
When the West Food Chain decided to sell out, Howard bought the store out and later moved to where the restaurant had been.   While running the grocery store, he became a substitute mail carrier in 1972.  After closing the grocery & hardware store in 1982, he became a full time mail carrier and delivered mail around Chandlerville, Oakford, Kilbourne and Mason County with 20 years of serivce.
Howard enjoyed his daily coffee routine fondly called “going to the office”.  He loved going to Hollywood’s Cafe and solving the world’s problems with all his “buddies”.  His other favorite pasttime was taking care of his yard.  He loved getting out on the lawnmower and making it look good.
One of the best days of his life was when he went on the Land of Lincoln Honor Flight in September of 2011.  He enjoyed looking out the window during the flight to Washington DC and going to all of the sites, especially the World War II and the Air Force Memorials and the throughly enjoyed the Air and Space Museum.
Howard was a member of the Chandlerville Volunteer Fire Department and served as its Fire Chief for a total of 35 years.  He was a member of the Chandlerville American Legion Post # 694 for 70 years signed up under Frank Snyder.  He attended the Fairview United Methodist Church with his wife for many years.
He is survived by his daughter, Janna (Matt) Zachary of Chandlerville, Illinois; niece, Jessie (Edean) Leinberger of Chandlerville; sister-in-law Joyce Johnson of Beardstown; grand nephew Joe (Della) Leinberger of Chandlerville, grand nephew Jason (Lizzy) Leinberger of Bloomington, IL; grand nephew Josh Leinberger of Chanderville;  grand niece Lisa (Bob) Nannen of North Pekin; grand niece Angela Davies of Littleton, CO; and grand nephew Nicholas (Tara) Davies of Chillicothe. Also surviving 4 great nieces and nephews and various other nieces and nephews. He is also survived by his favorite granddog Dobbie.  He was preceded in death by his parents, wife Margaret, daughter Alicia, brother Harold Johnson, sister Berneice Nichelson and niece Bertha Davies.
In lieu of flowers, donations may be made to the Chandlerville American Legion, Chandlerville Volunteer Fire Department or Fairview United Methodist Church Cemetery Fund. Online memorial messages may be left for the family at www.hurleyfh.com.
Visitation will be held at Lintner-Hurley Funeral Home in Chandlerville from 4 p.m. until 7 p.m. Monday, December 28, 2015.  Funeral services will be held at the funeral home on Tuesday, December 29, 2015 at 10:30 a.m.   Burial will follow the services at Fairview Methodist Church Cemetery in Mason County.