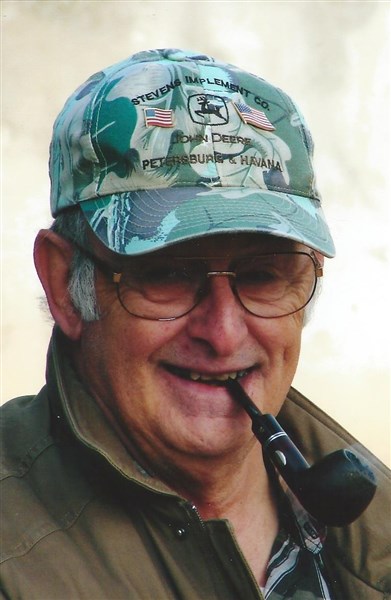 Warren H. Berkley, 77, of Lewistown, passed away at 6:18 AM Thursday December 3, 2015 at his home.
He was born May 4, 1938 at Lewistown, the son of Kenneth M. and Nolena (Morgan) Berkley. He married Mary Lou Van Etten on December 21, 1967 at Lewistown. She preceded him in death on November 27, 2015. He was also preceded in death by his parents, and two brothers, Kenneth M. Berkley Jr. and Marion Berkley. Survivors include two sons, Andrew (Christie) Berkley of Mason City, Daniel (Bethany) Berkley of Morris, three daughters, Holly Little of Jacksonville, Susan (Jack) Walden of Glenarm, and Christine (Bill) Sander of Phoenix, AZ; 14 grandchildren, two great grandchildren, and one sister, Ina Mae Whitehead of Lewistown.
Warren retired from Caterpillar East Peoria Plant. He served in the United States Air Force from 1957-1960. He was a member of the UAW and was of the Methodist faith.
A visitation will be held Thursday December 10, 2015 from 5-7 PM at Henry-Lange Memorial Home in Lewistown. Cremation will be accorded after the visitation. A private family graveside service with burial of ashes will be in Oak Hill Cemetery at Lewistown with military rites accorded by Lewistown VFW Post 5001 and American legion Bishop Post 1. Memorial contributions may be made to Beacon of Hope Hospice. To view Warren’s life tribute video or to send condolences visit www.henrylange.com